Property for sale in Mallorca 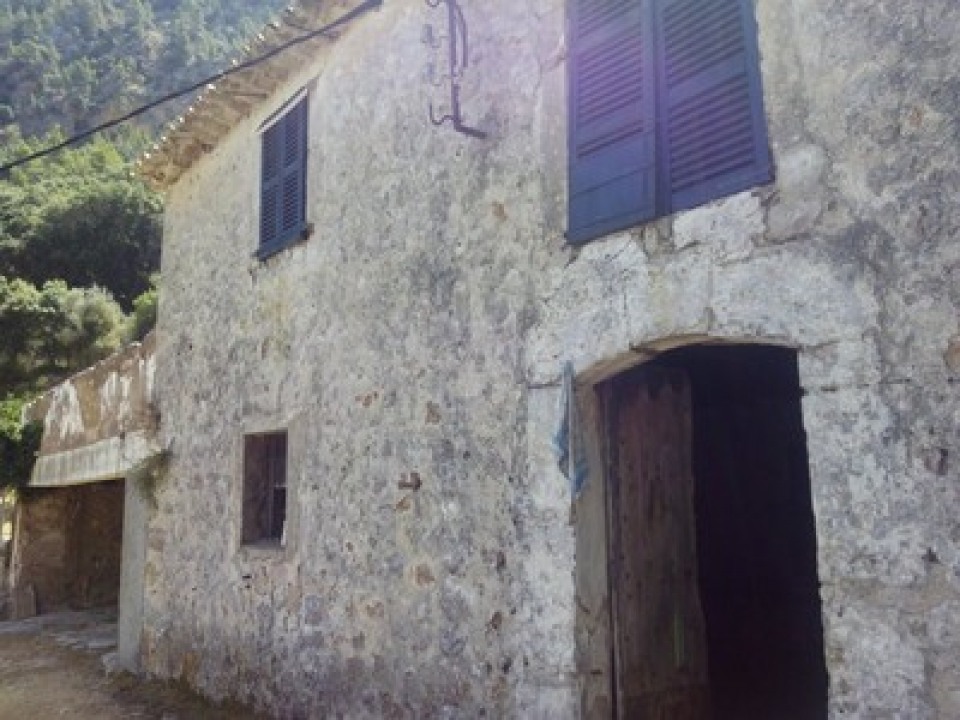 It is on the slope of the same Sierra de Alfàbia, is where is located this house of 272m2 built, on a land of 42000 m2 of land, with fruit trees, irrigated and rainfed, among other orange trees, lemon grove and scrub forest And oaks, and timber forest for the sale of firewood, and another undeveloped section.
In the same farm there is a natural source of water, in property, with a large cistern. You also have the possibility of buying another plot attached to the farm of 350.000 sqm per 100.000 €.

The house, of two floors, and that needs reform, dates from the year 1900 and the date of its last reform is of 1,980.
It has several rooms, fireplaces, 5 bedrooms, kitchen, terrace, orchard, exposed beams, the roof is Arab tile and has electricity from Gesa.
It has an entrance from the road and it is possible to make another by the back of the house.
It has rainwater cistern.
The location, in the middle of the Sierra, gives the house exceptional views, and the peculiar tranquility that gives to be in the nature.
But to only about 5 km of the center of Sóller, in which are all the services, and even the Train to the center of the capital, Palma.

The Serra de Tramuntana, has been declared world heritage by the Unesco, in the category of Cultural landscape. It is the recognition of the international community to the symbiosis of almost perfect between the action of the human being and nature, carried out during centuries, of which has result a monumental work human in which are mixed culture, traditions, aesthetics, spirituality and identity.

The Serra de Tramuntana vertebra the Northwest of Mallorca. It stretches for some 90 km, with a maximum amplitude of 15 km, on the territory of 18 municipalities – being the older Calvià, Sóller, Pollença and Escorca-, What is almost a 30% of the island territory and more than 1.000 km2. The nuclei live ones 8.000 Personas, but the population of buffer is of 40.000 inhabitants. In it, several peaks exceed them 1.000 m height, highlighting the Puig Major (1.443), Puig de Massanella (1.348 m), the Serra d’ Alfàbia (1.069 m), is Teix (1.064) and Galatzó (1.026 m). Is in the same Sierra de Alfabia skirt, It is where this House of 272 m 2 is located, on a Sun of 356.094 m 2 of land, with tree fruit, of irrigation and of dryland, among others Orange, limoneros, and scrub and Holm oak forest, and timber forest for the sale of firewood, and another unproductive stretch. In the same building there is a natural source of water, in property, with a large water tank. casa la, two-storey, and need reform, data of the year 1.900 and the date of his last reform is of 1.980. Available in several rooms, fireplaces, 5 bedrooms, kitchen, terrace, Huerto, beams, the cover is of Arabic tiles and has electricity of Gesa.

The property is from the Coll of Soller 2 km down before arrive to the tunnel, is all the mountain .

Enquire about this property

Country villa with vacation license for sale in Muro

Country house for sale just outside of Fornalutx

Country house for sale just outside of Fornalutx Only a short walk to reach walk you reach the square with its restaurants, bars, and shopping facilities. Country house located on even ground and surrounded by orange trees, the property has…

Great opportunity to buy a village house in Muro

Great opportunity to buy a village house in Muro Great…

Lovely village house in mint condition for sale in Muro

Lovely village house in mint condition for sale in Muro…

Owning a home is a keystone of wealth… both financial affluence and emotional security.